In this project, we discuss the impact of genetic variation on the use of CRISPR-Cas9 as a therapeutic tool. We first outline the difficulties of avoiding off-target effects in the use CRISPR-Cas9 gene-editing technology, which is made more difficult by the unique SNPs in an individual’s personal genome. We next propose a tool to identify PAM sites in the reference genome as well as in Carl Zimmer’s genome and then compare the sets. Finally, we calculate libraries of guide RNAs for both genomes and discuss their differences.

How might SNPs in Carl’s genome impact the use of CRISPR as a treatment? Discuss how individual SNPs would impact the off-target effects in the presence of the SNP.

CRISPR-Cas9 nucleases are gene-editing technology that can be used to cleave specific sites in the genome of a living cell. They are made up of two component parts: a Cas9 protein and a guide RNA (gRNA), also known as a single guide RNA (sgRNA), which is approximately 100 nucleotides in length. When used for genome editing, the CRISPR-Cas9 nuclease recognizes two sites on the target DNA: the protospacer and the protospacer adjacent motif (PAM) sequence. First, the Cas9 protein binds with the PAM site. Next, the 5’ end of the gRNA base-pairs with the protospacer, which is then cleaved.

CRISPR-Cas9 has many applications that involve specific genome editing. It has already been used in agricultural and research contexts, but arguably the most exciting application for CRISPR-Cas9 is to alleviate the effects of genetic disease. In the future, CRISPR-Cas9 could be used to correct disease-causing mutations in patients with cystic fibrosis, muscular dystrophy, or even cancer. However, CRISPR-Cas9 has not yet been proven safe enough for therapeutic use in humans, as it cannot yet be used with perfect accuracy.

A significant challenge to the use of CRISPR-Cas9 is the prevalence of off-target cleavage mutations. In theory, cleavage should only occur at sites with sequences that perfectly match both the protospacer and PAM sequence intended to bind to the gRNA and Cas9 protein, respectively. However, in practice, off-target sites with up to five mismatched nucleotides can also be cleaved by the CRISPR-Cas9 nuclease with similar efficiencies as the intended site. If enough off-target sites are cleaved, this could cause major structural effects in the genome, including deletions, translocations, and other rearrangements. For CRISPR-Cas9 to be used as a therapeutic tool, methods must be improved to computationally predict these off-target effects, detect them if they occur, and effectively prevent them.

Two potential methods of preventing off-target effects are to increase the specificity of CRISPR-Cas9 nucleases and to limit their activity overall. One method to increase CRISPR-Cas9 specificity is to use shorter gRNAs, with the intent that there will only be sufficient base-pairing to bind the gRNA to a given sequence if it is a perfect match. In order to limit the activity of CRISPR-Cas9 nucleases, their half-life may be decreased with the intention of preventing binding to less likely sites.

Recently, software called GuideScan was developed in order to improve the selection of gRNAs (Perez et al. 2017). The software can be customized for a particular genome and Cas9 protein. The user then defines their desired PAM site, the distance between the PAM site and the protospacer, and the size of the gRNA. The software then provides sets of gRNAs that could be used to edit the genome in the desired fashion. Importantly, the software predicts gRNAs that would be prone to off-target effects and eliminates them. Generally, this includes gRNAs for which there are other sequences in the given genome that are an exact or close (by one or two nucleotides) match with the desired protospacer. In this way, GuideScan can be used to increase the specificity of gene-editing with the supplied gRNAs.

Single nucleotide polymorphisms (SNPs), which cause the genome of interest to differ from the reference genome at a particular point, can impact CRISPR-Cas9 efficacy in two ways. First, a SNP in the intended protospacer or PAM site could cause the CRISPR-Cas9 nuclease to cleave that site less efficiently or not at all. This is relatively easily avoided by specifically examining the sequence of the region of the genome where CRISPR-Cas9 is meant to bind and accounting for any SNPs that may be present.

Second, a SNP elsewhere in the genome that increases the similarity of that region to the intended site may introduce an off-target effect. In this case, examining the reference genome may not reveal any off-target sites, but the SNP may have allowed for an unpredictable off-target effect. This is more difficult to detect, because it involves examining a much larger portion of the genome – possibly the entire genome. However, the ability to predict which mismatched sequences or potential SNPs may increase the likelihood of off-target effects may help avoid this problem.

Doench et al. investigated the likelihood of specific sequences to cause off-target effects (2016). They found that off-target effects can result from slightly mismatched PAM sites or protospacer sequences. For example, a Cas9 protein that is targeted to a PAM site with the sequence NGG could show off-target activity at NAG, NCG, or NGA PAM sites.

These trends, therefore, can be used to predict the likelihood of off-target effects in the genome, particularly when SNPs are present that cause the individual genome to differ from the reference genome. These are important to consider, especially when CRISPR-Cas9 is being used on an individual genome, such as the Zimmerome.

Here we present an implementation of a tool which finds PAM sites in the genome of subjectZ, the human reference genome, and compares the two sets.

The premise for this tool is as follows. Z’s genome has been aligned to refernce version 37, so we begin with aligned .fa files for both the Z and reference genome. We first search for the 5’-NGG-3’ motif across chromosomes in both genomes. We also search for the reverse complement 3’-CCN-5’. Our comparison of similarity is to find sites which are preserved between Z and the reference.

To determine sequence preservation, we had to extend our sequences. A 3-nucleotide region is too small to reliably detect, especially when one base in that motif is not constrained. To preserve functional specificity, we collect 21 nucleotides upstream of the 5’-GG-3’. We then take the first 1000 PAM sites per chromosome on the reference genome, find all PAM sites (with 21nt 5’ flank) on Z’s genome, and determine what fraction of sites were exactly preserved between the two. While CRISPR targeting does not require an exact match between gRNA and target, and in theory two PAM sites may be preserved if their flanking regions differ, this level of complexity was not possible to model without taking on a large number of additional assumptions (and increasing runtime).

The following shows the similarity of Z’s genome to the reference for the first 1000 PAM sites on each chromosome. As expected, many sites are preserved. The variability observed here may be due to the effects of downsampling, which was necessary given memory constraints on this implementation. 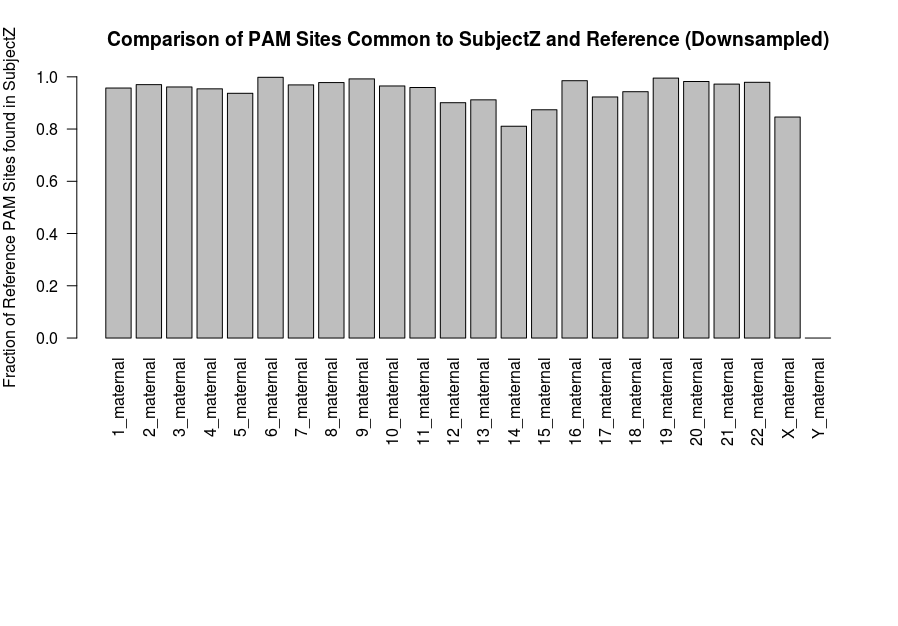 GuideScan software is an open-source package (available at https://bitbucket.org/arp2012/guidescan_public/overview) that constructs gRNA libraries based on user-defined parameters (required dependencies for the software include python 2.7 with easy_install, along with rename, biopython, samtools, pyfaidx, and bx-python packages, and the pysam module - details can be found in the README.md file that comes with downloading the GuideScan software). In addition to generating libraries based on the most recent human reference genome, GRCh38, and those of other species, it allows users to input their own .fasta file, such as those of Carl Zimmer or GRCh37, which was used for the alignment of Carl’s reads. GuideScan allows users to input a list of chromosome names, desired gRNA length (excluding the PAM sequence and typically 20 to 100 bases long), alternative (to canonical NGG) PAM sites to analyze off targets (defalt is NAG). Users can also include a minimum mismatch similarity (M, default=2) between off target loci and a maximum off target genomic distance for more degenerate potential off-target loci (Q, default=3).

On interactive online version of GuideScan (www.guidescan.com) allows users to examine a much smaller guideRNA library with a user-friendly interface. The online tool is convenient when looking at a single specific guideRNA and information of its off-target loci. The typical output is an Excel file with the following columns:

The cutting specificity and efficiency scores are based on Doench et. al. The specificity score is the likelihood a gRNA will be cut at each individual off target site. It is calculated by counting neighbors of up to Q mismatches, getting a cutting frequency determination (CFD) value and a count for each mismatch neighbors (that is, unique targetable sites in a user-specified range of mismatches) using a mutation matrix. The counts and corresponding CFDs are multiplied and the results are summed. The specificity score is the reciprocal of this value. 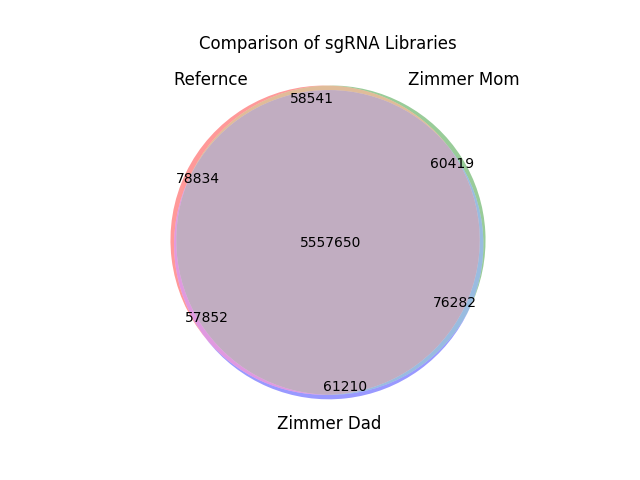